The mountain bike transversal from Brod na Kupi to Tršće takes you upstream of the Kupa River, where more than 100 species of butterflies live because of their exceptional ecological preservation and biodiversity. The entire Kupa Valley is often referred to as the Butterfly Valley. The road takes you along the right bank of the Kupa River to the picturesque hamlets of Kuželj, Gašparci, Turke, and numerous rapids and beaches may incline you to refresh yourself in the river. From the village of Hrvatsko to the source of Kupa there is a promenade, and in Kupari there is a visitor center ‘The birthplace of the Kupa River’. At the end of the road to Tršće you arrive at Zamost where you can see the still active water mill and sawmill of the river Gerovčica or continue along the road (P 2) towards Mali Lug.

The transverse road will lead you along the Čabranka River upflow first to the Plešce village. You must not miss to see Palčava šiša – a house owned by the Čop family from 1856 in which the old trade customs with original equipment have been preserved, as well as an arched groundfloor rooms with tavern, whilst on the upper floor is the old office, a saloon with rich equipment and decorations from 1880s and bedrooms. From Plešca we continue upflow along Čabranka River to reach Čabar – one of the oldest towns in Gorski kotar that is linked to Crusaders who passed across this area. The development of this area is connected to Petar Zrinski who in 1651 built in Čabar an iron smeltery. The most famous facility in Čabar is the Zrinski Castle from 16th century and only 700 m distant from the castle is the spring of Čabranka River that you must visit.

After riding on a relatively plain road from the centre of Čabar begins a more demanding rise (4 km) until Parg. Riding up through serpentines towards one of the coldest places during winter in Croatia, you will leave the Kupa valley behind your shoulders as well as one of the most beautiful belvederes of that area – Tropetarska stijena rock reachable through the homonymous instructive trail. In Parg you will reach the crossroads with the Tršće – Prezid road on which you turn left and after 3.5 km reach the centre of Tršće. But, if you want to ride another few kilometres and discover more attractions of the Čabar area, in Parg turn right towards Prezid and after 4 km you will reach Goat’s peak where you turn left towards Milan’s Peak – an extraordinary landscape with hunting lodge and fenced area for deers. From Milan’s peak you can reach Tršće through the forest trail (P1). 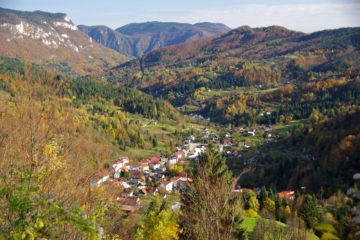 There is a very interesting educational trail called Tropetarska stijena, which was established because of its beautiful natural surroundings and […] 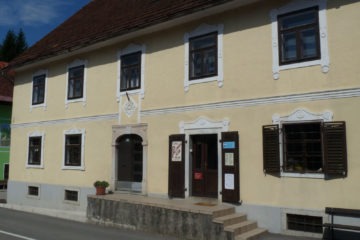 Palčeva šiša is a house owned by Čop relatives from 1856. It is a cultural monument located on the border […] 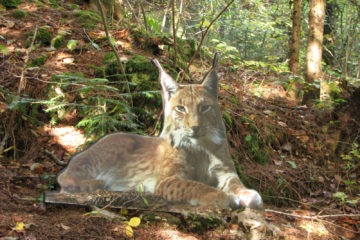 The Predator trail is a 1.7 km long tourist educational trail with mostly life-size replicas of animals. Apart from predators, […]

If you want to descend from Gerovo area to the Kupa Valley, then use connection road P1. Here you can see the birth house of the legendary Petar Klepac as well as still active mill and sawmill in Gerovčica.

When you descend from Lividraga to Gerovo (ČB 30), at the crossroads with the main Tršće-Delnice road, continue straight through the centre of Gerovo to reach Mali Lug. In the very centre you cannot miss the sculpture of the legendary giant Petar Klepac, by his birth house. Not far from the sculpture, on the crossroads (ČB 28) turn right towards Zamost. A descent along a windy asphalt road follows to Zamost where, before the main crossroads (ČB 23), on your right side a mill and water sawmill will appear.

The best way to reach the lake karst emerald source i.e. the source of the Kupa River is to take the P2 connection road. But, as its name implies, you can use it to connect the Kupa Valley and the area of Crni Lug in the opposite way. Riding from Gerovo direction towards Crni Lug, not far before Malo Selo, you will notice on your left side a crossroads with asphalt road that will take you to the source of the Kupa River and the Kupa Valley. If you turn left, after 2 km on the narrow road you will descend first to reach the Biljevina village and after another 2.5 km you will reach Razloški Okrug where you turn right in the direction of Razloge.

In Razloge, which is another 4 km away, you will find the Risnjak National Park info kiosk as well as the beginning of a mountain trail along which you will, in some 30 minutes, arrive to one of the most beautiful mountain views – source of the Kupa River. Continue to descend steeply from Razloge through the canyon of the Kupa River towards Hrvatsko which is another 5 km away. Due to a steep, windy but very attractive road, we recommend you to be extra cautious.

The P5 connection road is the simplest way to descend and reach the Kupa Valley or ascend from it to reach main roads leading to the sea or to the continental part of Croatia.

At the petrol station in Delnice turn left and with no much effort let yourself enjoy the beautiful views of Drgomlje and other mountains surrounding the Kupa River Valley. You will have to pedal twice a short distance, first near the Marija Trošt village and then just before Brod na Kupi when the road starts to follow the Kupica River which flows into Kupa in Brod na Kupi itself.

The cycling trail P6 connecting Brod na Kupi and Skrad is one of the most attractive as well as one of the most demanding connection roads on the mountain cycling traverse road. It is recommended to those who like high-adrenaline trails because of parts that are mostly narrow forest trails and steep ascend. From the main road that connects Delnice and Brod na Kupi turn in the direction of Iševnica and cross the bridge above Kupica. Continue on the asphalt road along the Curak stream and after 2.5 km, near Donji Ložac, turn right on the gravel road (on the same crossroads you can continue on the asphalt road that will take you directly to Skrad).

Then you have another 1.5 km of gravel road which ends with a widening. Continue after that on the promenade along the Curak stream which you will cross over several times across small wooden bridges. On some parts of this trail you will also need to push your bike. After 1.5 km of enjoying the beautiful blend of Curak’s water flow and flora diversity, you will reach steps that will lead you to the asphalt road which will take you to the Zeleni Vir excursion point. After visiting Zeleni Vir, take the same road back to reach previously mentioned steps and continue uphill towards Skrad. You will have to pass 2.5 km of steep ascent until the first crossroads on which you turn right and after 1.5 km of a closer ascending you will reach Skrad.